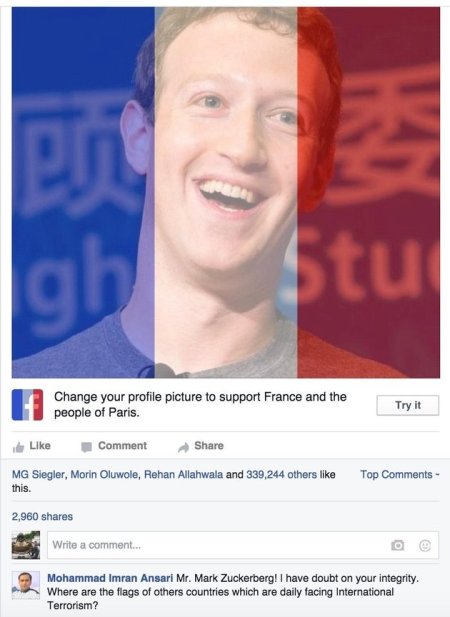 I’ll write this post in english, since it’s a multicultural debate hoping to gather different opinions and POVs (points of view). Please forgive typos and potential inappropriate use of language. The aim of this post is to analyse how social networks impact strongly in helping leaders in critical situations and have also the power to steer public opinion regarding highly emotional facts. This power comes with a responsibility, that of choosing wisely when using this power and the tools that realise it. I’m quite sure we are looking at “a first” and at facebook HQ decisions have probably been taken quickly and without in depth analysis, nevertheless terrorism and war is different from natural disasters and once you step into these situations allegations and perception become a key factor.

Paris.Friday november 13th 2015 a series of coordinate terrorist suicide attacks strike France, leaving 129 dead and 300 wounded. The attack has been claimed by Isis.

No particular reaction from the global social network facebook has been noted after Beirut attacks. In the immediate hours after Paris strike, facebook took two actions: one based on emergency and another one with a clear political implication.

Emergency management in Paris Attacks. A “Safety Check” tool, until now used only in natural disasters as Earthquakes or Typhoons, has been activated allowing people in the area (Paris) to notify the system they were ok. The tool is extremely useful and efficient as it reminds and allows those in the area of danger to inform their families and friends, it helps police and autorithies to track the situation and gives peace of mind to people. Well done facebook! Why haven’t you done it also in Beirut, though, who has the same penetration of facebook than France and apparently higher usage rates?

Activating “social participation” in Paris Attacks. The morning after the attacks (it means a few hours since the attacks were at 21:40 CET) a tool to customise one’s profile picture adding an “overlay” cit the french flag colours was activated and apparently widely adopted. Social Media conversations, as it’s natural, have centred massively on Paris facts. Especially in Europe and USA, but through Social network dynamics have probably been globalised, giving to Paris facts a “global status”. This happened obviously for a large reaction from media and people, but for sure the “emotional engagement” and the spread and participation has been helped by the constant reminder of our friends “frenchified” profile pictures. This is less an emergency tool, more a public opinion position taken by the company: “we stand by the french”. And we enable and activate people to say so. A very powerful tool. Who has decided to do that for Paris attacks? Why not for Beirut attacks? For which ones will it be used in the future?

These different decisions are not so relevant “per se” but more to pose some questions on the decision making process inside facebook regarding disaster management and political support. And regarding facebook perception around the world.

Overall the activation of safety check on one hand and of profile picture change” on the other, although being very different in nature (the former an emergency tool the latter a position statement) had very similar effect on the public opinion: raising awareness and augmenting emotional engagement. Thanks to these decisions of facebook the Paris attacks have been perceived even more dramatic (not that they aren’t in any case) because of this constant reminding, the count of safe/unsafe friends and the global manifestation of grieving and support happening every second on our smartphones from our friends, even when they are posting of something else. Since this means a huge power, the power to steer and influence public opinion, it comes with a great responsibility: that to use this power wisely, transparently and with equality. Of course facebook is a private company, with very little public regulations, but when it comes to influence and activate the masses on themes such terrorism and war we must ask ourselves if such a power can be left in the hands of a private company without rules or criteria and without access to how these decisions are taken.

It is possible that the decision is based on algorithms, analysing the social engagement and empowering it (only) when it reaches a certain level. It appears more “neutral”, but is basically an engineered support of “status quo”, perfectly understandable for a large scale media company, but still worth of observation and analysis. In this case there’s a further element of interest or conflict: the fact that the entire situation is based upon the different perceptions of war and death and violence in two areas of the world: the attacks on Paris are brought and claimed under the idea of inequality and that this kind of violence is a dailly burden in Middle Est. An explosive situation in which “taking a side” (or even worse encouraging and facilitating millions to do so) is a statement to take very carefully for someone who wants to be considered global and neutral. Let’s see for both decisions the implications more in detail and discuss the consequences, present and future ones.

Safety check: does it need a safe choice? Given that the safety check tool is a great service everyone wish to see activated whenever necessary, it must be said that until now it had only been used on a global scale for natural disasters such Earthquakes and Hurricanes. Using it for terrorist attacks or acts of war is as much useful as for natural events, but it needs to be done with equality and transparent criteria IMHO, to avoid criticism or perception of partiality as it’s happening today in Lebanon, where people is asking: “why we couldn’t benefit from such a useful tool?” (-> NY Times – HuffPost  – A comprehensive list of lebanese questions on why Beirut attacks could not benefit from “Safety Check” feature and more and many more…)

Profile picture social activation: a public or private decision? It’s an incredibly powerful tool and it is so powerful only because it lies inside a huge social platform like facebook. If someone created an app to do so the response would never have been so fast, vast and effective. Facebook is presenting us the opportunity with just a “tap” on our smartphone to transform our profile picture and express our grieving, indignation, participation for a specific tragedy: an un precedented social accelerator of participation in a cause or in a conflict situation like this.

The same technique had been previously used to show facebook support to LGBT cause. It’s a tool that requires just a click to transform and update you profile picture with an “overlay” whose colours connect to a social cause or to a specific country as in today’s events.

Just a click (or a “tap”) to transform your profile picture and show “your” solidarity to Paris.

Its has been defined as a “solidarity” move and there’s no reason to doubt that it is so, but contrarily to the LGBT cause here there’s more “sides” as it’s a highly inflammable political situation bordering with war. Moreover it must be remarked that changing the profile picture after facebook suggestions is clearly an emotional decision by the people accelerated, as we said, by facebook: a decision taken in seconds, in the aftermath of a shocking event, with a very strong emulation factor (“All my friends are doing it… should I also?”) with a great impact both on general public opinion (the billions on facebook) and on media which is always hunting for page views and more and more publishing what is trending on social networks, therefore social activation tools on social media become indirect tools to shape also the media agenda.

A neutral and relevant example: Airbnb.

In the same saturation another “web giant” has decided to intervene and alter his everyday normality: AirBnb. The popular house rental marketplace intervened also as an “enabler” with a dedicated page but with strict connection to people needs (finding an accommodation in distress, as a matter of fact a spontaneous initiative ion twitter called #PorteOuverte has been registered where people welcomed people who could not get home the night of the attacks), with a history of repeating this type of actions in many situations of public distress, with no political approach and “taking sides” and directly contributing waiving its own fees.

All this situation raises some questions for which I don’t have the answers but for which answers must be sought IMHO.

As a matter of fact it is interesting to notice how facebook distribution map: 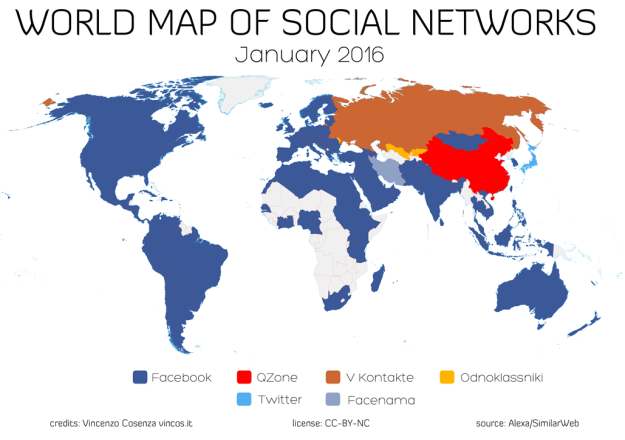 is almost identical to a very popular meme which is the “world tragedy map”, indicating how much we (don’t) care in relation to the place where a tragedy takes place… 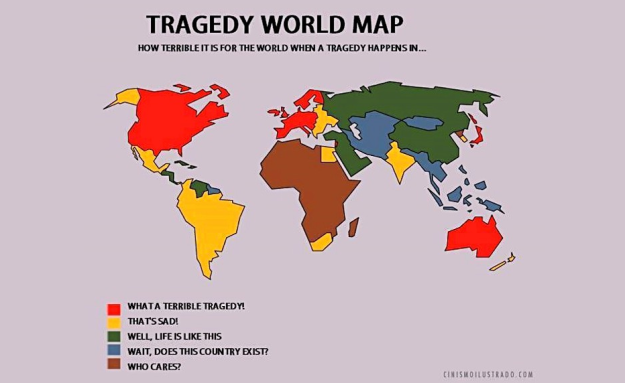